It is unusual for two biographies on the same subject to be released within a month of each other, but then again Kick Kennedy is an unusual subject. The second-born daughter of Irish-American parents, Joseph and Rose Kennedy, she is forever associated with her political family, most especially the American president John F. Kennedy. All of the Kennedy children had star quality, Lady Redesdale (Muv) had once remarked that JFK would one day become president of the United States. And so their charisma hypnotised London high society in the late 1930s, when Joseph Kennedy was posted there as the American Ambassador to the United Kingdom. The older girls were presented at Court, and Kick began to move in the exclusive circles of the aristocracy. She was an anomaly for her time: outspoken, forward-thinking, and silly. She could laugh at herself and openly joke with the gentry at a time when English girls, who adhered to formality, could not. Surprisingly, this won her a great deal of admiration and her greatest friends became Sarah Norton (daughter of the beautiful Jean Norton, Lord Beaverbrook’s mistress), Billy and Andrew Cavendish (sons of the Duke of Devonshire), and, of course, Debo Mitford. 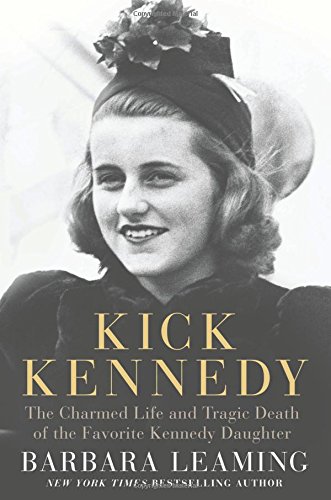 Barbara Leaming’s book, Kick Kennedy: The Charmed Life and Tragic Death of the Favorite Kennedy Daughter, explores the connection Kick shared with Andrew and Debo in great detail. The beginning of her book was a lovely surprise, with the elderly Andrew confiding his remembrances of Kick. And so her story begins and maintains its momentum as a portrait of a girl who moved at the centre of the British aristocracy. Through her research of Kick, she bypasses the Kennedy lore (only sprinkling Kennedyisms where necessary) to focus on the themes which shaped Kick’s life and her destiny.

The complex love story between Kick and Billy Cavendish dominates the plot, but the subplot of Andrew and Debo gives this story an interesting parallel. Here was a woman who had the world at her feet until WW2 destroyed her future and her happiness, as it did for so many families. With their long, drawn-out courtship happening on both sides of the Atlantic – often one-sided, and their battle to marry, it is bittersweet that they were destined only to be husband and wife for a short period. Billy, as the eldest son, was expected to inherit the Dukedom of Devonshire, and Kick was to be his Duchess (there are some interesting points on Georgiana, the Duchess of Devonshire), but after his death she was deposed by Debo.

Although both women were best friends, it was interesting to read about the hidden feelings Kick had about the new path her life had taken, and the (for lack of a better word) guilt Debo harboured for unintentionally usurping Kick.

Kick was killed in a plane crash at the age of twenty-eight, and although she had been widowed from Billy and had fallen in love with another man, the Devonshires continued to hold her close their hearts. Not only is this a story of an extraordinary young woman who took life by the scruff of the neck, it is an example of fate and how Debo became the Duchess of Devonshire. Perhaps it was Kick who paved the way and set the example of mixing informality with the pomp and grandeur of that lifestyle, which Andrew and Debo were renowned for.

Thank you to Barbara Leaming for sending me a signed copy of her book. Her narrative is informal and yet it draws one in, as though they, too, were sitting next to Andrew as he remembered his late sister-in-law. The beginning and ending were entirely original, given the acres of print written about Chatsworth and the Devonshires.

Part Two of my Kick Kennedy post will look at Paula Byrne’s biography, Kick: The True Story of Kick Kennedy, JFK’s Forgotten Sister and Heir to Chatsworth (released 19 May 2016). Both biographies are completely different and are extremely good. So please buy and read both of them! 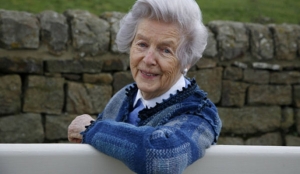 – An exchange between a radio interviewer and Debo

Even though she lived through the 1950s when Elvis burst onto the music scene, Debo did not become an avid fan until the evening of her life. Had she been a fan during his prime she surely would have been arrested for stalking – her claim, not mine! In her own words Debo described her introduction to the King in an interview for BBC Woman’s Hour: ‘I switched on the television one day for no reason and there he was and I suddenly realised I was in the presence of a genius. Never having really noticed him when he was on the go. I just thought this was the most brilliant performer I have ever seen and that’s what I still think. In my long life I’ve seen many performances of many people but there’s nothing comes up to him. Nothing.’

Debo soon advanced from a casual listener to an avid collector. Her collection contains many pieces of rare memorabilia (a plank of wood said to be from the fence at Graceland) to mass produced souvenirs (tattoo transfers and postcards). ‘One thing leads to another and it became a sort of joke…’ Debo said. She, too, could see the irony in owning such a vast collection containing street signs, car registration numbers, sketches, books, CD’s, slippers and a telephone which played Jailhouse Rock. ‘People are surprised, but some people are easily surprised, aren’t they?’

And speaking of her pilgrimage to Graceland, Debo said: ‘It’s really very moving because you feel it was his real home and he really loved it but of course the other fascinating side, to me – I love seeing round strange places -was that it was probably the last really early fifties interior which has been left intact. There is his amazing chairs and tables and the huge old televisions and the carpet on the ceilings as well as on the floor. It’s just extraordinary!’

Debo’s favourite trinkets from her collection are a few ‘roughly made museum pieces’, such as an Elvis themed cook book entitled Are You Hungry Tonight? Some of the recipes, mind you, were disgusting as Debo discovered; although a few of them, she thought, ‘might be’ delicious. ‘But it’s what he liked,’ she carefully added. ‘Fried peanut butter and banana…’ Other collectables included a pair of earrings made in Mexico from Coca-Cola bottle tops; ‘The trouble is, I can’t wear them because my ears aren’t pierced.’ And a black Elvis mug which says ‘Elvis Lives’, when hot water is added a picture of Elvis manifests. ‘So Elvis does live. He really does,’ she said. During the interview Debo searched her fireplace for some familiar Elvis photographs. ‘Oh, that’s my grandfather! That’s no good,’ she said as her eyes scanned the clutter. She spied a photograph of Elvis dancing with a teddy bear. Let’s not even mention the Elvis printed wallpaper in her lavatory . . .

Her husband, Andrew the Duke of Devonshire, was not an Elvis fan but he understood Debo’s infatuation with the king of rock ‘n roll. ‘He’s your hero!’ he caterwauled on the BBC programme Debutantes. ‘He’s your hero!’ he repeated just in case the enthusiasm was lost on Debo. I should add this was the result of an exchange between the Duke and Duchess on people who possess star quality (Debo nominated Lester Piggot, Rita Hayworth, Winston Churchill and the man himself, Elvis).

The greatest experience in Debo’s quest for Elvis was a touring concert which visited London. Elvis appeared onstage via hologram and was surrounded by his original band, ‘Some of them were grey . . . some of them were fat,’ Debo described the ageing musicians. ‘But the atmosphere was incredible.’ Despite her love for his music, Debo had admitted that she cannot sing any of his songs. ‘No of course not!’ she protested when pressed to do so by an interviewer, ‘can you imagine! It’s an awful idea, no no.’  Debo, however, admitted that she loved to retire to her drawing room in the evening to blast Elvis music on her CD player. ‘Banging away,’ as she referred to it.

Her Favourite song? Ain’t It Funny How Time Slips Away. It was symbolic, Debo thought, because he had become ‘such a travesty’ compared to what he was when young. ‘Very sad,’ she said.

You can read more about the Mitford girls and their love of fandom in my book The Mitford Girls’ Guide to Life.