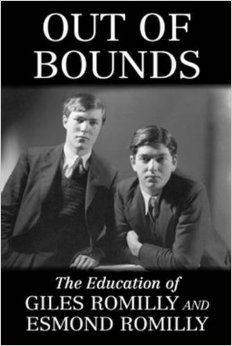 Much has been written about Esmond Romilly, husband of Decca Mitford, in books about the Mitford girls. A lot of it is hearsay, or formed from the unfavourable opinions of his sisters-in-law, and disapproving parents-in-law (Farve referred to him as ‘the BOY Romilly’). So, it is a treat that, for the first time in decades since it was released in 1934 and subsequently went out of print, Esmond’s voice can be heard. Co-authored with his older, equally brilliant, brother, Giles Romilly, the book was written following Esmond’s spell in a remand home. Rebellious and opinionated, the left-wing brothers shocked their Tory family (they were nephews-by-marriage of Winston Churchill) with their Communist views. Published when Esmond was sixteen and Giles eighteen, it is a memoir of their education, peppered with anecdotes about their eccentric home-life. Although it is a quick read, it is fascinating insight to young aristocrats who kicked against the establishment. This re-issued version of Out of Bounds by Umbria Press includes an introduction by Giles’s son, Edmund Romilly.